What is the best 70 inch TV UK has to offer right now? When considering a television in this size range, its important to note that to get the best effect it will require a room where the viewer is sat at least six feet away, otherwise the image can be overwhelming and artefacts will be visible, especially when viewing low resolution content, although there is still some impact with content in 1080P, and as this latter category encompasses the majority of programming the effect will be prevalent for most users. All the sets in this size range have 4K HDR capability, are SMART enabled, and some have innovative features such as Philips with their Ambilight system.

These sets can be much more expensive than smaller sizes, so for most consumers they will not be replaced as often as smaller sets. It is therefore important to consider the operating system, and whether the manufacturer is likely to offer software upgrades that enhance the capabilities of the set and provide some degree of futureproofing, especially in regard to smart and catch-up services. Mounting such a large set is also a consideration due not only to the weight, but also the type of stand. In some cases, these units are supplied with stands that require a very wide surface unless wall mounted. 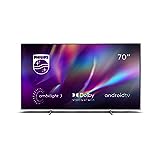 Price not available
Buy on Amazon

Featuring the Tizen operating system which has the widest range of services, apps and 4K content, this is a very slimline set with extremely narrow bezels and an attractive stand design. Samsung describe this set as having a “Crystal Display” and what this means in practise is that it is fitted with their proprietary Crystal Processor which upscales content to 4K and adapts image quality to suit the content being viewed. This results in a very sharp contrast and increased brightness that give the image a vibrancy often lacking from competitors sets. Purists may argue that this is an artificial and unnatural effect and may prefer a more natural image, however when viewed side by side with other sets it is a compelling selling point, and a feature that Samsung uses on most of their devices including phones and tablets and has won them many admirers.

Unfortunately, this set has limited inputs with just 2 HDMI and 1 USB port, however this can be increase with the use of an external HDMI switch at additional cost. Wi-Fi, Bluetooth, optical and antenna inputs are all present. The cabling is routed using the Samsung “Clean Cable Solution” which routes the cables through one of the stand legs to create a distraction free viewing experience. The remote-control unit can be used as a universal remote to control other Samsung devices which helps reduce clutter. For gamers, there is a game enhancement mode that dynamically adapts the picture and sound to fit the scene. This set is compatible with a wide range of smart home systems including Alexa, Google Assistant, SmartThings, and its own Bixby. Airplay 2 is built in to enable the streaming of content from Apple devices.

Users are generally pleased with the image quality and range of apps and services on offer; however, some have mentioned that it comes pre-loaded with a lot of services they would not use. The sound quality is reported to be acceptable but a little tinny so an external sound bar may be required for best results as the range of sound settings and technologies are also slightly limited. A very small number of users have reported that there are issues with screen flickering which necessitated the return of their units, and this appears to be a manufacturing issue that Samsung are aware of and may have rectified on new production sets.

The LG 70UN71006LAis a 4k LED TV with a standard 60HZ refresh rate, however, despite this it is still very good for fast moving scenes and for use with game consoles due to some of the picture modes and enhancements available and a very low input lag. LG’s LED technology offers pure and realistic colours to give you an incredible 4K Ultra HD display. This LG also features WebOS which is LG’s award winning and simple to use smart platform which hosts all the most popular streaming services including Now TV, Netflix, Amazon Prime Video, Apple TV, and Disney+. This is a slimline set with very narrow bezels featuring a two-pole stand which means that careful consideration is required of you intend to place it on a stand as the distance between the legs is large and a long stand will be required. The design and technology used in this set make it suitable for family or group viewing as it features a wide viewing angle so there is little degradation of picture quality or intensity for those positioned off centre.

Inputs / outputs include three 4K 60Hz compatible HDMI ports, 2 USB, optical, RF and SAT antenna inputs, LAN, composite AV, and headphone out, which should be sufficient for most needs. For wireless access this set includes Wi-Fi and Bluetooth for connecting wireless headphones or speakers. Unfortunately, this set does not support the latest HDMI 2.1 standard, but this is normally only provided on more expensive sets anyway.

Powered by an advanced quad core processor, this set has the full range of picture and sound enhancing features including upscaling of low-resolution content. Sound is better than most with a surround system built in and the ability to connect any Bluetooth enabled speakers wirelessly to enhance the spatial effect.

User reviews are mostly positive, especially with regards picture quality and range of features, however, some users have noted that some catch-up TV services that they normally use either not available or they suffer from software issues. FreeSat seems to have technical problems with frequent loss of signal reported. Some customers have claimed that their sets arrived with smashed screens, possibly due to poor handling, although this issue seems more prevalent with LG models than other manufacturers so its best to fully check the packaging before accepting delivery.

Philips does not normally get as much attention as the likes of Sony, LG, and Samsung; however, it has a trick up its sleeve that differentiates it from other sets and that is their proprietary Ambilight technology. Ambilight illuminates the area surrounding the TV with light effects that mimic what is happening on screen which creates an attractive ambience than compliments on-screen action. This particular set has three-sided lighting, which is towards the middle of the range, with basic sets having only two sided and the most expensive having a full four-sided lighting. Not only does it create an attractive effect, but also reduces eye strain and makes for a cozy environment and can highlight room features if customized correctly.

This 4K UHD Philips set has Android TV which means there are hundreds of applications that can be downloaded and some degree of futureproofing due to the ability to have firmware updates, although rollout of these is sometimes variable. This model has Dolby Vision and Dolby Atmos for excellent picture and sound, and all major streaming service have applications available. DTS Play-Fi is a feature that allows the sound to be played on any compatible speakers you have in any room. This set can be controlled using voice commands via either Amazon Alexa or Google Assistant.

This set is attractively designed with a metallic finish, light weight, and very slim bezel which makes it ideal for wall mounting. Inputs / outputs include four HDMI ports, 2 USB, optical, DVB-S and DVB-T antenna inputs (Freesat enabled), LAN, AV and headphone socket which should be sufficient for most needs. For wireless access this set includes Wi-Fi and Bluetooth for connecting external sound devices such as speakers and headphones. This set can be wall mounted using a 200mm VESA mount. One thing to consider with Philips sets is that they often use slower processing technology than other manufacturers, and whilst this is not an issue when viewing programmes, it can sometimes feel a little sluggish when navigating through menus and settings and the start-up time can be a little slow.

Most users are satisfied with both the picture and sound quality and are impressed with the Ambilight effects. There are many positive comments about the operating system and the range of services on offer. Some users have experienced problems with the reliability of the Wi-Fi connection and there are reports that the sets software can be buggy, requiring occasional resets and often HDMI connected devices do not perform as expected until the set is restarted. Most of these issues could potentially be fixed with a software update.

Slightly larger in size, this premium 75” set uses LED technology with a high dynamic range and is 4K HDR10 compatible. Powered by Android, it has a huge range of services available which can be controlled using the voice activated remote control which also controls Alexa or Google Assistant enabled external devices. There is a big focus on online services here and this set even has a Chromecast feature built in.

This is a stylish set with narrow bezels, but it has separate feet on either end so if you intend to place it on a stand it will need to be very wide – this model is best wall mounted. When wall mounting such a large set, please bear in mind that it weighs 32kg, so special brackets and fasteners may be required depending on the type of wall. The remote control has quick access buttons for Google and Netflix; however, it is not the stylish aluminium model offered with some of Sony’s sets, however, it is an uncluttered design that is simple and intuitive to use.

There are a whole host of picture enhancing technologies incorporated into this set, including “4K X-Reality PRO” which reproduces real-world detail and upscales lower resolution content to 4K, Triluminous technology which is powered by Sony’s X1 processor and reproduces life-like colour by widening the colour spectrum to encompass a range that is typically not found on other sets. This model has a native refresh rate of just 50Hz, however this can be enhanced by enabling Motionflow XR which reduces blur when viewing fast moving content and upgrades the refresh rate up to 400Hz. This is good in principle and benefits most program types, however, where fast paced sport is concerned it does not have the same effect as sets that have a 120Hz refresh rate. Dolby Vision uses HDR to bring scenes to life and creates a cinematic experience. For sound, there is Dolby Atmos compatibility which adds a multidimensional effect, and X-Balanced Speaker which Sony claim complements the TV’s design and drives out clear sound for movies and music.

Inputs / outputs include four 4K compatible HDMI ports, 2 USB, optical, DVB-S and DVB-T antenna inputs, LAN, and composite AV, which should be sufficient for most needs. For wireless access this set includes Wi-Fi and Bluetooth for connecting wireless headphones or speakers. Voice control is available and most smart services including Alexa and Google Home are supported. Unusually, Chromecast is built in, making the process of casting from a mobile phone or other device far simpler than on other sets.

Users are impressed with the image quality, range of features, and its performance when used for gaming, especially with Sony’s own PlayStation 4. The impressively fast start-up time is a feature that is often commended.